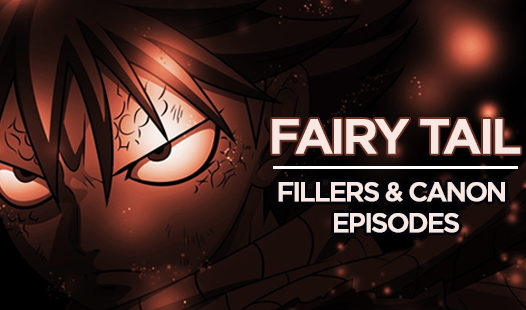 Roughly 19% of Fairy Tail is filler. But if you’re a die-hard fan of an anime, fillers might just be something you can watch when the anime ends. Or if you’re in no hurry to get back to your main storyline fillers can be indulging and interesting, allowing you to see your favorite characters in different scenarios without the stress of maybe losing them in the future (we know, the main storyline of so many animes can be super stressful.)

Fairy Tail has a total of 7 mixed canon and filler episodes.

So can we say fillers are all bad?

Some great anime have some superbly entertaining filler arcs believe it or not! In fact, sometimes filler arcs are likely to bring out under-appreciated side characters who haven’t gotten the spotlight but are extremely loved by fans.

So overall, whether you’re looking for a filler arc list because you want to avoid them or if you’re looking for a filler arc to help pass the time, we’ve got a good long list for you. Fairytale is a time-honored anime that is loved by millions across the world. And it’s safe to say, it possibly has the longest list of fillers any anime does! Not that our fans mind though, a good fairy tale filler has everything a good filler should have, a new villain, some new moves, some new powerups, and spells.

Which fairytale filler episode is the best?

A few interesting filler episodes that help you understand the fairytale cast a bit better are the ones that aired at the very start. These included an introductory visit (a few casual takes on the characters just to make the story a bit more lighthearted and help evolve the friendships)

We would recommend watching the first few fillers at least (skipping the 150-200) and you should watch the final four fillers (as a way to say goodbye to the cast if you’re an avid watcher.

We follow Natsu across Fiore as he goes through ups and downs trying to find his father. His guild is a group of the most interesting wizards and the fillers really help you understand them a lot better. Overall, fairytale has a lower number of fillers than you usually find in anime (actually as low as 19%).

Overall, fairytale has a number of filler episodes (instead of filler arcs which are common in some other popular animes).

Overall fairytale consists of a total of 328 episodes and ended fairly recently in 2019, the manga had been concluded a short while ago but the animation continued until 2019 (it had started all the way in 2009).

The story features (as previously mentioned) Lucyheartfilla who wants to become a member of the fairytale guild of magicians. Eventually, she meets Natsu and the two of them embark on their journey meeting more members on the way. As expected the entire story is action-packed and interesting for people who are interested in fantasy fiction tales (this is possibly the best of them all.) Overall some of the fillers in the series do a very good job to make the entire thing a lot more interesting and spicy. The anime has a certain sweet side to it with its constant jokes and friendships which change and shift into a number of different bonds over the anime. The quest for something better if also something you can always look forward to, fairytale has a very out-there vibe. It’s like every episode makes you feel like you’re doing some better or working towards a better goal.

Fairytale fans have always loved the entire adventure theme of it and the exploration that comes with it.

Fairytale is a loveable anime about action, friendship, and most importantly wizards. With its small filler count, the entire anime is worth watching and enjoying.