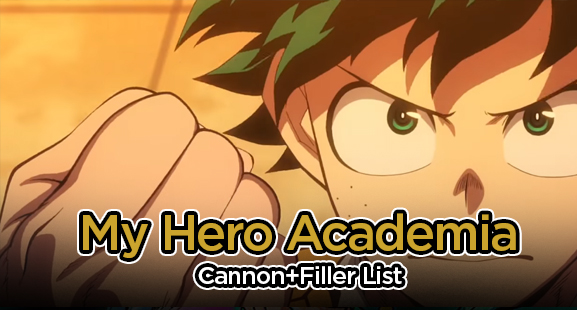 Fillers are an essential part of every anime,. They provide backstories and also sometimes provide well-needed breaks in the anime. They can also be used to show the characters in other settings where they are free from any form of threats and danger. In many ways, fillers can be used to showcase the other, less-discovered sides of the characters that we all love.

Boku no hero academia doesn’t have many fillers:

One of the main distinguishing features of my hero academia is the fact that it has a super low filler episode percentage, where other Shonin sows have complete arcs dedicated to filler episodes like in naruto, my hero academia’s filler list comprises of only 4 episodes. Which for a shonen show or any other anime is super low. Since the total number of episodes is 88, this makes my hero academia filler list percentage only a mere 4.5 %. To put that in perspective series like naruto have a percentage of over 40%. In other words, my hero academia’s a conceive show that focuses mainly on the developing plotline and does not like to include any interferences along the way, they only do so when it is absolutely necessary.

For some people who are too engulfed in the main story, fillers may not be that interesting to them. They can save them for later and watch them after they have seen the entire season.

For that purpose, we have created this filler list for the ever-popular anime and manga series, my hero academia.

Our my hero academia filler list will tell you all you need to know about the episodes, which are filler, and which moves the main storyline forward.

The story of my hero academia is set in a world much like ours within which there is a constant battle between the forces of good and those of evil.

Except for one small exception, in the fictional world of my hero academia almost all of the population have abilities known as “quirks” these quirks can be considered as superpowers, they can be used to stop criminals or they can be used to become criminals. Hence the presence of quirks forms two opposing sides, the heroes who fight to maintain peace and justice whereas the other group is aptly known as villains who use their power to spread evil.

Our story revolves around a boy named Izuku, who is obsessed with superheroes mainly a single superhero named “all might”. Like every other kid who wants to be a hero, Izuku too wants to become just like “all might” the most powerful hero of them all. However there is a major problem with Izuku, he is among the unfortunate 20% that don’t have quirks. Through a series of events Izuku meets his hero all might, it is also then when Izuku finds out about his hero’s critical injury. Seeing the determination of Izuku, all might transfers his power to the young boy in the hopes that he would defeat evil. He then enrolls in the academy of heroes where his life begins anew.

On the surface, my hero academia may seem like the typical superhero story, but just one step into the fascinating world of this manga reveals that there is so much more to it than that. The amazing character design, phenomenal animation paired with a fast-paced story filled with funny and dark moments are just some of the highlights that make this series amazing.

The story offers some really interesting characters and plot twists that make the entire series come to life. Although the story may seem to the average user as a run of the mill, Shonin jump series it is certainly not. There are a lot of changes and distinct features about this mange that makes it different from all the rest, in short, it’s a must-watch for anyone who loves the Shonin jump formula on which other popular manga series such as naruto and black clover is based on.